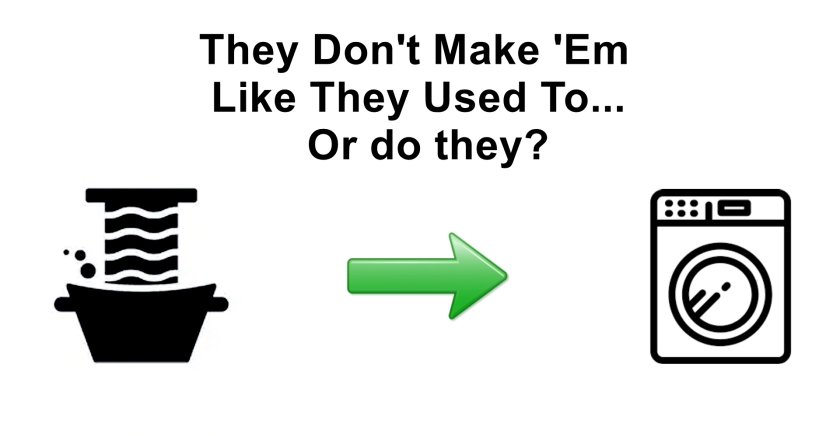 This has been said time and time again, but generally that phrase is not followed with, “That can be a good thing!” Appliances in general, have become lighter in weight, much more efficient due to more strict energy usage guidelines, so much quieter, perform much better, temperatures are more accurate and best of all, they have become easier to use. More so now, than ever before, it is a great time to buy a new appliance!

We hear the same stories over and over:

“I’ve had this old washer for 25 years. Why can’t they build them like that anymore?”

“My parents just got rid of the refrigerator that they had when I was born!”

Sure! They were great appliances back then. Compared to now though, they are much more expensive to run, much louder than a current generation appliance and offer very simple cycles or abilities. The pluses definitely outweigh the minuses.

You may need to replace a major appliance, on average, anywhere between 8 to 12 years after purchase. For example, I have a range that lasted 10 years, a washer that lasted 11 and a refrigerator that is still running on year 16. The point is, though, that when these appliances were replaced, I noticed that my clothes were cleaner. They smelled better after a wash and dry cycle. My energy usage went down. My new range is induction, something that a decade before was far out of my price range as it was considered a new technology then. It is much more responsive than my old coil top and also more energy efficient. Again, I saw another drop in my energy usage.

Appliances are much less expensive now. Let’s go back to your Grandmothers GE Range. In 1966 that range was $699.95. What a deal! Well, not really. Let’s adjust that for inflation. In 2019 dollars, you are looking at a $5,461.13 range. While we do offer ranges in that price, a comparable model to your grandma’s GE would run you in the $2000 dollar range. Much less than the more luxury ranges that would be over $5000.

The ranges will have much more accurate temperatures now as well as new technology in holding a low simmer or keeping what you are cooking warm. In the higher output burners on gas ranges, you will be cooking over a hot flame for less time!  That in itself is worth a ton.

Cooking products like Wolf, and Bertazzoni (One of the oldest in the industry), GE Cafe, and Kitchenaid are some of my recommendations. Please click on each name and take a look at what they offer! They are all accurate, easy to use, and built with the cook in mind.

So we have looked at upfront cost of a range, let’s look at usage cost of a refrigerator. We are not going quite all the way back to the 60’s in this one, just back to 1992. In 1992, an average refrigerator would cost about $283 ($510 adjusted for inflation) to run. Today a comparable refrigerator will cost about $55 a year. WOW! Even I am surprised at that cost difference. That current cost per year is an average size of 21-25 cubic feet, the same size used for the 1992 cost.

Those cost savings do not even take in consideration the preservation of foods. Most companies today concentrate more on preserving the food that you purchase rather than just chilling it. This is done in various ways such as separate compressors for the refrigerator and freezer, controlled humidity in separate sections and more doors with adjustable temperatures and humidity. Your foods will last much longer and retain their nutrients until you are ready to use them.

Current water filtration is also much more capable of removing contaminants as well as keeping your water cold, or hot, depending on your refrigerator. Some will also pour out pre-measured portions of water for cooking and baking. You know that fridge from 1992 in your garage will not do that! All while saving you money!

In Refrigeration, on the top end, Sub Zero is still Sub Zero. Materials, workmanship, attention to detail, and ‘food preservation’ as their goal. While not breaking the bank, LG and GE Profile are great standbys, but in reality all refrigerators are made to the Energy Star guidelines for energy consumption, so pick what is going to work best for your space and the way that you cook!

All of this being said, there are still many stalwarts in the industry who, using the build quality of old and the technology of today, can give you the best of both worlds. Longevity and technology. In Laundry, Speed Queen is one of those companies. Known for their commercial machines and their use of knobs (KNOBS!) instead of buttons or LED lights, these machines will last a long time as well as save you money on energy and water usage. Speed Queen claims a 25 year lifespan. That is with new technology!

Dishwashers tend to be a class of their own. We know that everything we talked about so far will save your energy and water usage, but dishwashers take it a step further. They will deliver you silence and that is priceless! The amount and type of insulation that is used now will reach decibel levels  equal to that of a quiet living room. (See our Bosch Dishwasher blog entry for more information on sound levels) ASKO and Bosch dishwashers, are at the top of this game with Cove just coming out and becoming a competitor.

So, they are correct, “They don’t make ’em like they used to.”  More efficient, easier to use, more accurate, better performance, affordable, and  way more consumer friendly. We have a great selection of all of these at Metropolitan Appliance, so come in and check them out. Things are looking up! Things are being made better than they used to!